George Kozmon is a Cleveland-based internationally-known artist specializing in large-scale drawing and painting. I learned of George through our high school art teacher, Vincent Ferrara, in the 1970s. Then, he was producing energetic action figures for weekly art class critiques, and soon after incorporated figure and portrait drawing using students as subjects that he would ask to pose outside of school. I followed his career, through is time at The Cleveland Institute of Art (CIA), and remember seeing his large drawings at a student show there. Most memorable were architectural renderings, and an expressive black and white drawing of a lawn mower. His drawing skills were becoming expert and there was a certain confidence to his work even early on. Upon graduating, he remained in Cleveland but at that time exhibited primarily outside of the city, around the country. He moved into large architectural works. Then into more figurative work. And most recently, uses mountains and clouds as his primary subject matter. I recently saw him at Cleveland’s IngenuityFest ‘performing’ his art with paint and brush onto an 80-foot long curved canvas over the course of three days combining architectures with mountains and clouds. He became the real-life action figure walking in and out of his invented environment. I was very impressed with the piece and his idea to do it, as documented in these few moments with him on day two of the three-day project. 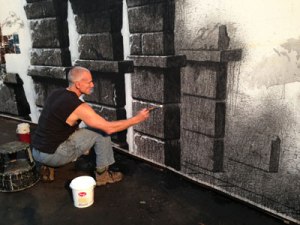 This entry was posted on Sunday, September 29th, 2013 at 10:32 pm and is filed under architectural design, art, art exhibit, art festival, artist, Cleveland. You can follow any responses to this entry through the RSS 2.0 feed. Both comments and pings are currently closed.