Do You Know the Color of the Year?

Having been educated in the graphic arts and printing industry in my career as a graphic designer, when color giant Pantone® speaks, I listen!

Artists and designers, you may be interested to know that Pantone® has named the color of the year – Marsala. According to their web site it is described as “a naturally robust and earthy wine red.”

Additionally, the Pantone® Fashion Color Reports for Spring 2015 and Fall 2015 have been announced. These reports are released months in advance, the Spring report was released last September, and the Fall report was released this month (February). These reports are generated in conjunction with scheduled New York fashion shows that forecast clothing trends. I think it is very valuable as a designer to have this information to incorporate in creative visuals over the course of the year.

Color winners of the last five years are on the site, as well as other favorites.

Need inspiration? Browse around the Pantone® Canvas portfolio site. You can also sign-up and showcase your own work! 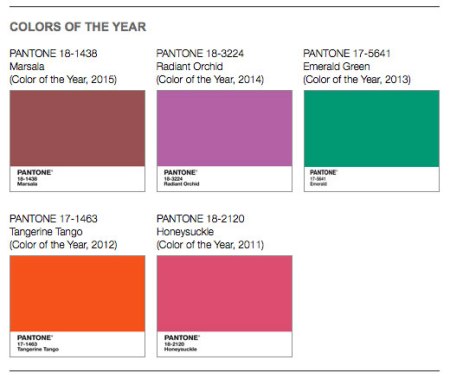 Pantone Color of the Year 2015

This entry was posted on Sunday, February 22nd, 2015 at 5:42 pm and is filed under art, artist, Color, creative, digital, Fashion, graphic art, graphic design, inspiration. You can follow any responses to this entry through the RSS 2.0 feed. Both comments and pings are currently closed.