Schmitz-Horning Company of Cleveland, Ohio (1905-1960) was recognized on a global level as a high-end large scale chromolithograph designer and manufacturer of art murals and posters, wall decorations and wall coverings.

The company advertised in architectural and decorating trade magazines, and produced postcards with their patterns, and fully illustrated catalogs.

The original wallpaper and mural designs were meticulously drawn or painted by skilled artists then transferred onto lithographic plates, the largest in the country at the time, with the imported zinc plates exceeding 40″ x 80″ in size. Expert catalog illustrators recreated the patterns and rendered interiors showing their applications.

These catalog illustrations are beautiful and demonstrate a high degree of artistic ability and design.

Some of the catalogs themselves exist in our family, as a record of the business that my great-grandfather (H.M. Schmitz) co-founded and ran, and of which my grandfather (W.R. Schmitz) later oversaw.

Here are some of the Schmitz-Horning Company catalog illustrations, created and signed by B.E. Sutton, Anne Nolan, and D. Scott Brown or Scott D. Brown, D.S. or S.D., and other unidentified yet talented artists. 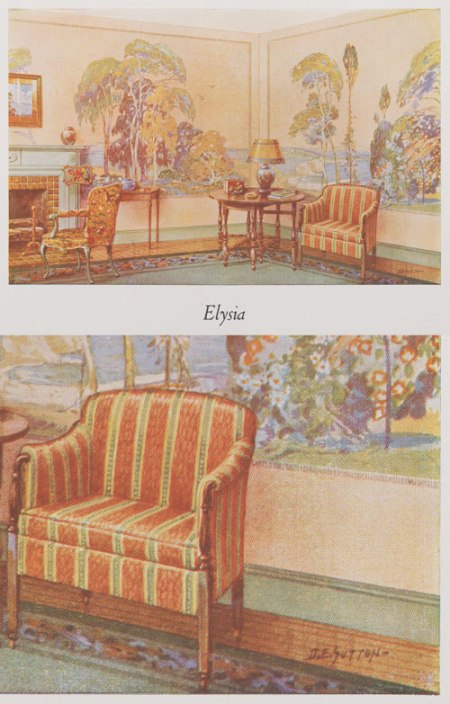 Comments Off on Artists D.E. Sutton and Anne Nolan Illustrated for Schmitz-Horning Catalogs |