Loving Vincent is the first fully oil painted animated feature film, created on the life of Vincent van Gogh. The story takes place one year after his death, and the actual subjects of his paintings and landscapes are brought to life. We walk through time and space (as perhaps Vincent did) as if walking through his paintings, exploring the people in his life and the timeframe leading up to his death, recounted through black and white painted flashbacks.

The facts and controversy surrounding his death are presented to us, and are well-researched, referring to 300 actual historic letters. Over 100 artists contributed to the film, which is composed of 65,000 painted frames, and took six years to make. Ninety Four of Vincent’s paintings are recreated into the film, starting with a cast of actors that resemble subjects like Armand Roulin, Dr. Gachet, and Postman Roulin, Theo his brother, and even Vincent himself and filmed on video, then CGI techniques were applied and frames painted primarily by 80 selected oil painters. Decisions were made by varying palette color and frame dimensions in order to be both true to the paintings as much as possible but also make the movie scenes and characters logically work.

The film is brainchild of Dorota Kobiela, a painter herself, after her emotional response to reading his letters, and has received or been nominated for many awards. 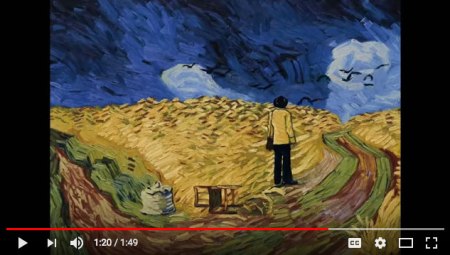 Loving Vincent, Behind The Scenes. A presentation by Director/Producer Hugh Welchman
https://www.youtube.com/watch?v=eOtwJL4iV8s

This entry was posted on Saturday, January 27th, 2018 at 8:28 pm and is filed under Vincent van Gogh. You can follow any responses to this entry through the RSS 2.0 feed. Both comments and pings are currently closed.