The Spirit of ’76 Statue 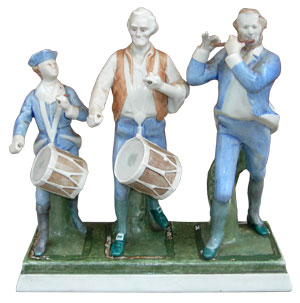 Statue of Spirit of ’76 by Archibald Willard (Schmitz family archives).

An unusual object has been passed down in the family – a “Spirit of ’76” statue. I had know little about it, even after showing it to three local auction houses, until one day a couple months ago. I believed it had been given to my great-grandfather, Hugo M. Schmitz, by Archibald Willard, the Ohio artist who painted the Spirit of ’76. The two met in the late 1800s and both attended and exhibited at Cleveland’s Art Club, of which Willard was president.

Because of my mention of it in my 2/27/2017 blog post, my image of the statue shows up in a Google search for “spirit of 76 statue,” which may be how a woman in Texas came to contact me regarding her similar statue. What are the odds?

The woman sent photos and provided a link to the Bedford Historical Society, in Bedford, Ohio (Archibald Willard’s birthplace), who apparently also owns a statue and has a web page about the manufacturer. The page states that the statue was manufactured by the Bailey-Walker China company in 1926 (which became the Walker China company in 1942) of Bedford, Ohio. Her statue was almost identical to ours. And after a trip to the Bedford museum I was able to confirm that theirs was also the same. (I learned at the museum that Willard’s own father was the model for the center drummer figure.)

Additional information had been passed down to the Texas woman by her grandmother regarding her statue in a note which she shared with me. It said that Bailey-Walker China produced a limited edition of 100 of these statues, made of fine china, which sold for $40 a piece at the time, and some retailers offered them for $120. Some of the statues went to Europe.

However, now the idea that our statue had been given to my great-grandfather is in question because Archibald Willard died in 1918, eight years before the statue is known to have been produced. Was ours a prototype made years in advance of production? it is signed on the bottom, and the other two aren’t. That would explain things. Or was it given to my grandfather, Warren R. Schmitz, maybe by Mr. Willard’s family? Who acquired it from where, and when? These are questions from the past that are fun to unravel, as I continue to learn about it.

Spirit of ’76 statue manufactured by the Bailey-Walker China company, owned and on display at the Bedford Historical Society, which I visited in April, 2018.

The grandmother’s note also said that when those who possess the statue are known to each other it is hoped to cement a very warm and lasting friendship.

So far we know there are two in Ohio and one in Texas! Are there any more out there?

Comments Off on The Spirit of ’76 Statue |