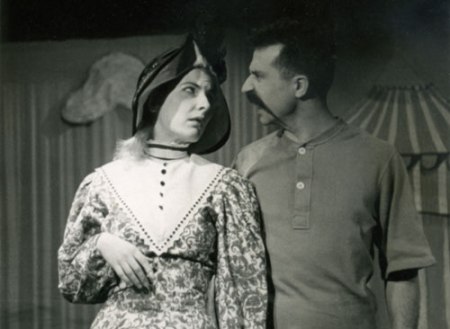 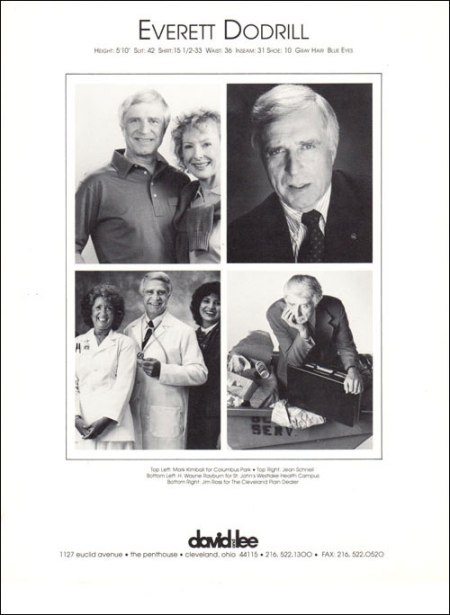 The Schmitz-Horning Co., a chromo-lithographic wallcovering firm, was in business 55 plus years, from 1905 to 1960. But the company may have started in 1903 as a litho poster production company and then developed their own line of wall murals, friezes, and scenic wall papers around 1905, branded San-Kro-Mura. They offered an attractive yet inexpensive product line, using oil-based non-fading color oil-based inks printed on high quality paper that was sanitary or fully-washable. Later as new scenics and panoramics designed, the brand Kro-mura was created.

They rented space at the Whitney Power Building or Power Block at E. 10th and Power Ave., between St. Clair and Rockwell, and later moved to their own building at 777 E. 82nd Street in Cleveland, near Gordon Park. In 1906 a patent was registered for the ‘Frieze’ by co-owners Hugo Max Schmitz and William Horning, along with their head salesperson, Warren R. Cox. The Frieze was a repeating continuous scene which surrounded the room at the top of the wall. In the early years it would take two years to complete the plates for a single scenic. The 43″ x 83″ hand-fed lithographic presses used were the largest in the world. The company custom built three, Schmitz-Horning had two, the other being in London, England. Zinc plates had to be shipped from Germany.

The company produced some of the largest wall maps in the industry.

Hugo Max Schmitz (1867-1938) (my great grandfather), co-owner, was an artist who came to Cleveland, in his 30s, in the late 1800s, and was from a large German family in Milwaukee, Wisconsin. He married Pauline (Queen) M. Reynolds in 1902, who was a society lady. They lived in East Cleveland and later moved to University Heights, Ohio. 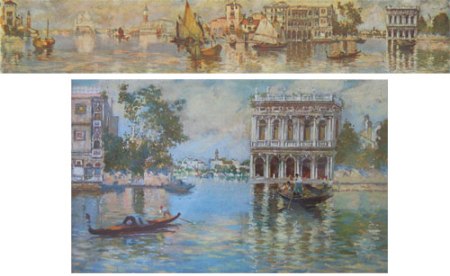 He was a member of Cleveland’s Art Club, with mostly German members, that met in City Hall. He traveled to Paris and Morocco, and perhaps to Morocco with other artists. In one of these paintings, he painted a cleaning girl from a New York City office building and won an award for it (either second place or honorable mention) at an exhibit at the Metropolitan Museum of Art. Our family has a couple of his original watercolors and oils, including a portrait he did of my great grandmother. They honeymooned in Venice, and a watercolor he did there became a wallpaper pattern called Venice. He was rated as one of the best litho-crayon artists in the industry.

William Horning, co-owner, sold his interest in the company to Hugo around 1920, but worked as a lithographer in Cleveland.

Warren R. Schmitz (1905-1970) (my grandfather), son of Hugo M. Schmitz, started working at the company after college around 1929 in sales and promotion, and designed sales brochures, books and displays and traveled to various dealers in the U.S. He ran the company after his father’s death in 1938 until it closed around 1960.

After time, the company produced small scale salesman samples of the wallpapers for sales calls. Prior to that they were taking long rolls on calls. The same high quality inks and papers were used on the smaller scale versions. Warren Schmitz modernized the product line, obtaining sketches from prominent artists. New sales promotion aids were printed in-house using a small Harris offset press. In the 1950s he appeared on the TV show ‘What’s My Line?’. The company was also featured on a radio segment called ‘On Location’ with young announcer Virgil Dominic, sponsored by The Illuminating Company.

Henry G. Keller (1869-1949) was a Cleveland School Artist and taught there. He designed the pattern, Chateau de Province, while in his prime. It was a French rural scenic, an included a chateau, native trees, and a fox hunt of equestrians with horses. It was 10 sections, each near 33″ x 72″.

Carl Fuchs designed Old South, believed in the 1940s, of plantation life in early America, including a steamboat and fox hunt. There were twelve sections, each 40″ x 80″ in repeat pattern. 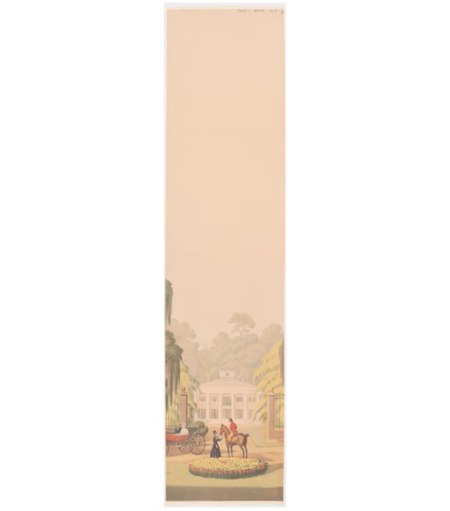 Lou Ramacciato, began working at Schmitz-Horning after graduating from Cleveland Institute of Art in 1946, and later went on to work 28 years at the Cleveland Museum of Art restoring art and preparing gallery exhibits.

Glenn M. Shaw and Elsa Shaw had a studio in Lakewood and both worked commercially and taught. Elsa did some design work for them, though Glenn designed a number of patterns for the company, including 5 illustrated maps which were said to be accurate, the Old Canal set which depicts the Ohio and Erie Canal between Cleveland and Bath, Ohio, and Old Dominion which is a set of 7 panels. Each panel is 30” x 80” plus, could be trimmed at the desired height. He is known for painting murals in three post offices, in Canton, Warren, and Perrysburg, Ohio.

Paul A. Meunier was a litho artist, from Hunting Valley, who worked at the company for 11 years. Two other family members worked there, Ovid Meunier for 25 years and Laurence Meunier for 7-10 years. After leaving Schmitz-Horning, Paul became partner then owner at R.E. May, a plate-making company, that is still in existence today on E. 24th Street in Cleveland. I found an old brochure page on their website which shows Paul, and in another photo on the same page is a small-scale Schmitz-Horning western mural, called Wells Fargo. The Western Reserve Historical Society has a full size set of the pattern in their collection.

I found a still life watercolor by Paul Meunier on ETSY in 2011, and his name plate appeared on the back of the framing. He painted it in 1937, during the span of time when he worked at Schmitz-Horning. He wrote a book on the history of Gates Mills, Ohio, and there is an award in his name at the Gates Mills Art Show. I read that a painting of his was in the chamber room of their city hall. He enjoyed drawing, printmaking, and painting wildlife and horses.

Ed Sinz worked at the company for 35-40 years. We have Christmas cards, to my grandfather from the sculptor Walter Sinz around the 1940s, possibly Ed’s son or relation.

Here is a comprehensive list of known artists or litho artists that worked at the Schmitz-Horning Co., either on staff or assignment-based, as designer and/or litho artist.

Posters and displays were printed for
Advertising Agencies:

When I began to uncover material from the company in our family home, it sparked my interest. Starting with my first blog post about Schmitz-Horning in 2011, I began writing a series of blog posts, and started to receive many inquiries about the company and patterns. I hope to continue my research and  produce a publication on it one day.

Comments Off on Artists of Schmitz-Horning Company |

During our sunny, warm autumn in greater Cleveland, we were host to a renowned pop artist’s exhibit which warmed the soul! Peter Max had a retrospective of over 125 works of art at the Beachwood Community Center, in Beachwood, Ohio from October 16-25, 2015. Peter Max was available in person for the last two days of the show, to meet the public and to personally sign purchased artwork. I was able to attend the event, and converse with him. On two other occasions I also met him, once at his art exhibit in Little Italy, Cleveland, Ohio, and once at the Rock Hall. On one of those occasions I received a personalized autograph in exchange for a 1971 Peter Max Paper Airplane book that I had brought with me with intentions to have him sign. And, I recall an exhibit of his at Tower City one year that I attended with my late mother, which we both enjoyed. 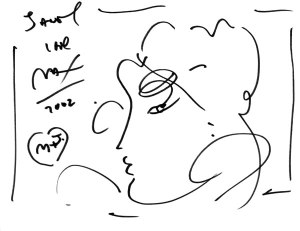 I am continually impressed with his work, the use of color, and the energy the work transmits. I love the use of broad multi-color brush strokes, and ever-changing subject matter and evolving style.

If his work comes to town again, I will surely go to see it, to be once again inspired.

(Text and photos copyright Janet Dodrill. Not to be used without prior permission.)

Peter Max exhibit at Beachwood Community Center, Beachwood, Ohio. Nearby trees were decorated in anticipation of the exhibit.

Comments Off on Peter Max Continues To Impress! |

The new design features red, white and blue to utilize the colors of the American flag and emphasize an American brand. The square shape is to push their motto to treat customers ‘fair and square’, and the frame suggests that the customers remember to frame the things they love, a theme which is evident throughout their marketing.

Penney’s previously attempted to redesign the logo in 2011, however it was not received well and said to be like the GAP logo disaster (after social media backlash, Gap pulled their new logo design in 2010).

I favor their ambition and idea of a branding makeover, and personally adore their supporting TV commercials featuring Ellen Degeneres. However, in my opinion, I would tweak the new logo design, making the tiny blue box in the upper left corner larger. Why all the big empty white space inside the red frame? When the logo is reduced the company name initials nearly disappear (Also, see their favicon in their web site URL).

Will calling it by the JCP initials catch on? Anyone I know has always referred to the store as Penney’s.

Jcpenney Gets All Patriotic With Its New Logo Square design reminds customers to ‘frame the things they love’, Adweek

Comments Off on New JCPenney Logo Unveiled in 2012 |