About three years ago I joined a Friday night portrait sketch group, The Pretentious Cleveland Portrait Artists. The website is at www.literarycafeartists.com and the weekly model sessions can be found at the blog link. The group (formerly known as The Pretentious Tremont Artists of the Literary Cafe) was founded in 2005 by Tim Herron and Brian Pierce, who wanted to practice portrait drawing and drew bar patrons late every Friday night at the Literary Cafe in Tremont, Ohio. Over that past 15 years the group has grown. It is unique that it pays the model for their time with the finished portraits! Though the original meeting location has changed, the group has still been open to all for both drawing and public viewing while the artists work.

Since March 2020, because of the Covid-19 pandemic and stay at home orders, the group was able to move to an online streaming platform, thanks to the help of seasoned arts interviewer, Roger Miller, of Tues@7 on Facebook and YouTube, managing production for the first 12 weeks. This has enabled even a broader reach of artists to join in the weekly drawing session, beyond the Cleveland area. Artists then send in their portraits to give the model.

Around April of 2020, Tim Herron was interested in drawing portraits of doctors and nurses as a thank you for their service on the frontlines of battling the Coronavirus. Several artists around the world were making the news at the time involved in similar projects. Through his network of models, artists, and friends and their connections, he started receiving photographs and selfies of healthcare workers from different locations and hospital systems, including MetroHealth Hospital and the Cleveland Clinic. He opened up the project for any artists in his Friday group that wanted to participate.

So far (as of March 23, 2021), 18 artists have participated in this “Doctors and Nurses in Covid 19 Times” project, creating 155 original portraits, which are showcased on the group’s website at www.literarycafeartists.com/doctors-and-nurses-in-covid-19-times.

I personally have produced 28 portraits for the project to-date, and will continue to do more. It’s great practice and I enjoy being part of a group of artists working together. I have an individual webpage on the group’s site at www.literarycafeartists.com/janet-dodrill, where they can be viewed under my general portrait gallery. We are following along with the idea of giving the portraits to the models, in this case the doctors and nurses.

MetroHealth Hospital in Cleveland currently has an exhibit in their lobby, since last fall, of their portraits, which is visible to the public when they visit for their Covid vaccines. Linda Jackson at MetroHealth organized photos and exhibit. They also produced a video on the project, Local Artists Honor Frontline Health Care Workers.

As a result of posting some of my doctors and nurses portraits on instagram (@janetdodrill), I have been asked to tag these works for a curated North American exhibit using hashtag #portraitsforcovidheroes for inclusion in the project by Jules Smith @jules_smith_artist and @portratisforcovidheroes.

Thank you, to all healthcare workers helping to battle this virus in this pandemic and save lives. You are true heroes.

Who doesn’t have an appreciation for an artist’s handmade Christmas card, or one displaying their artwork?

My grandfather, Warren R. Schmitz, who ran the Schmitz-Horning Company (1905-1964) from 1938-1964 received Christmas cards from artists who were either associated with the company or family friends, including Harvey Stief, Walter Sinz, and Charles Reiffel. Here are a few examples of the wonderful artwork on cards he received from them in the 1930s and 1940s. 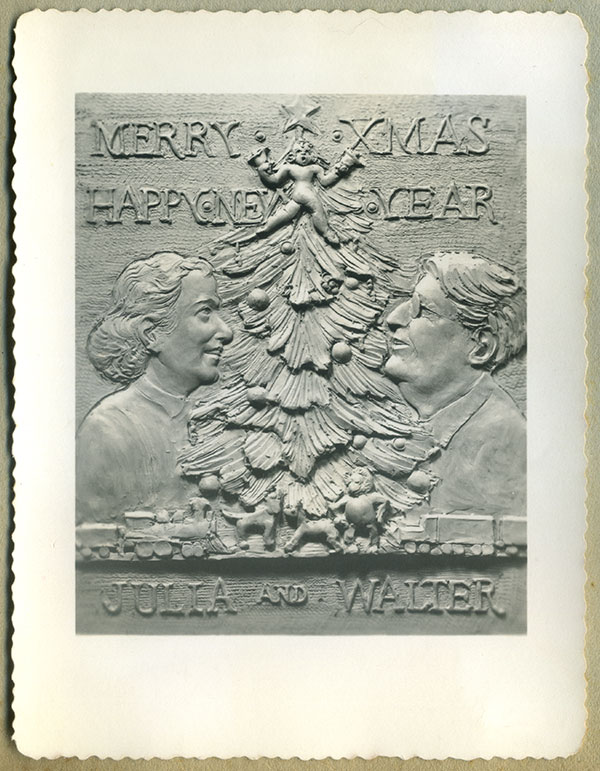 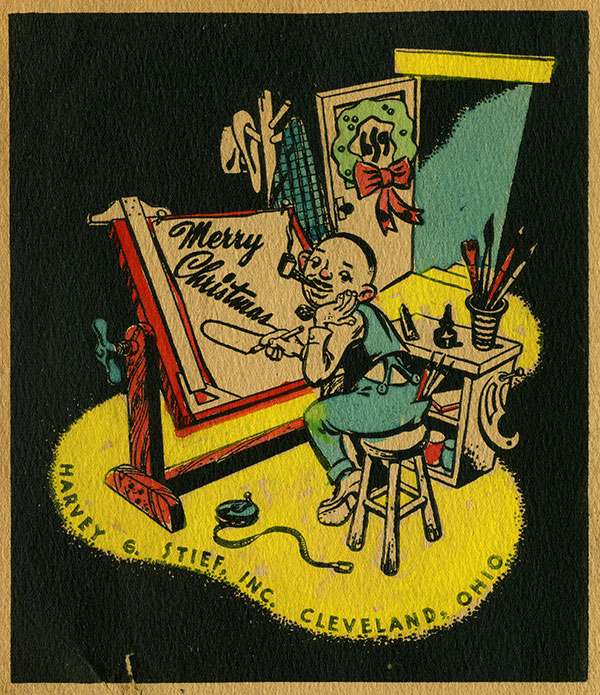 Lately, I have been using primary colors (red, yellow, and blue from the color wheel) in my portraits and life model studies, and am exploring this direction in my artwork.

Below are a few examples of my artwork utilizing primary colors. 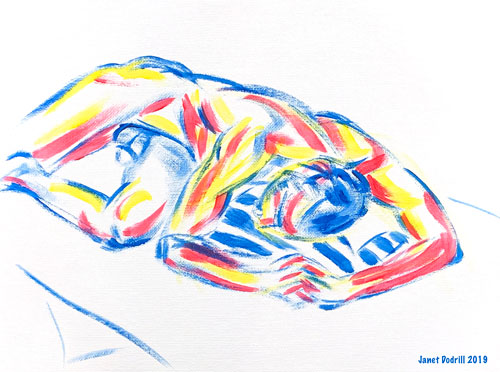 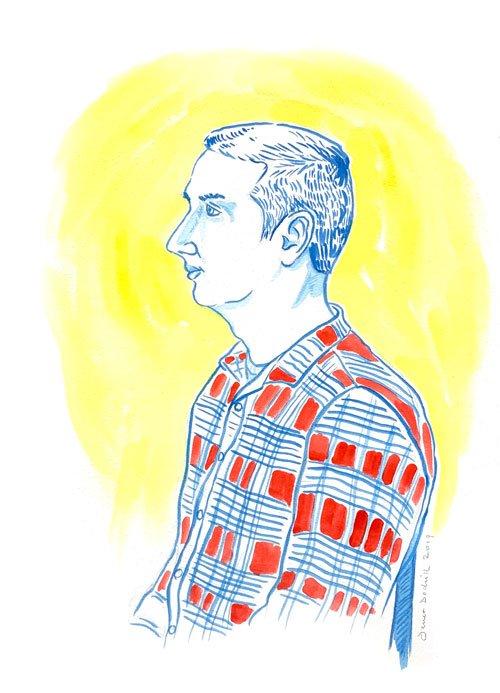 Comments Off on Artwork Using the Primary Colors |

The show has numerous drawings and watercolors done in both Cleveland where he attended the Cleveland School of Art (now The Cleveland Institute of Art), and Salem, Ohio, his hometown.

I admire his strength and energy in depicting landscapes. He created his own visual language with almost abstract shapes from nature symbolizing emotions such as fear and sorrow, which are pointed-out in the exhibit.

Below are some images from the show.

Charles Burchfield exhibit at the Cleveland Museum of Art 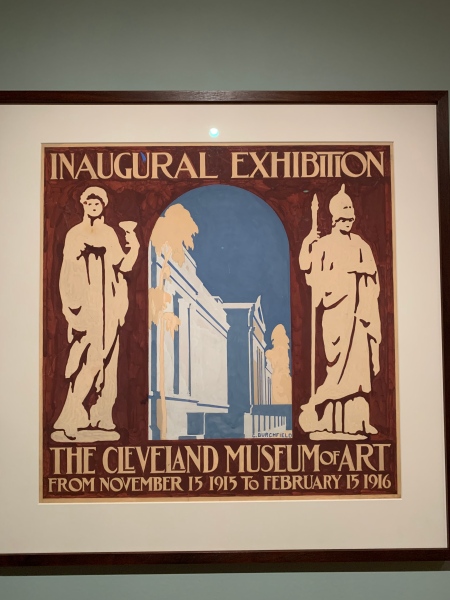 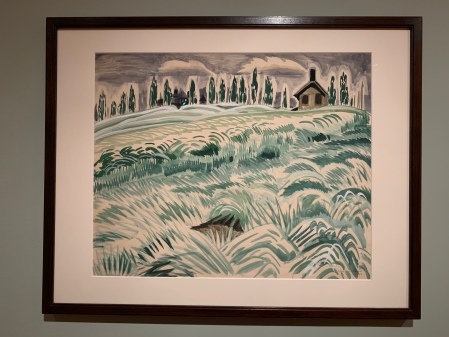 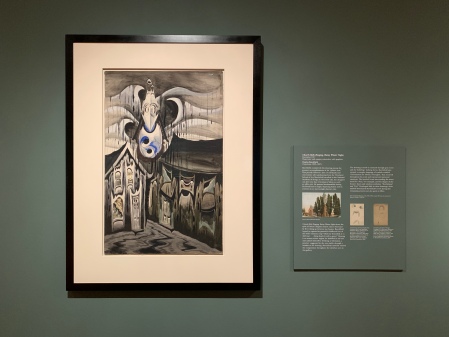 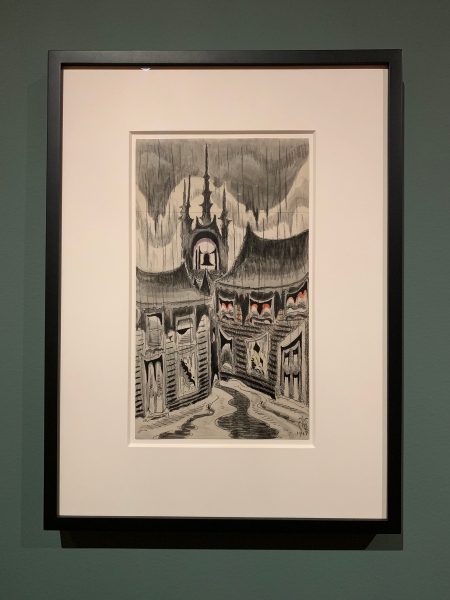 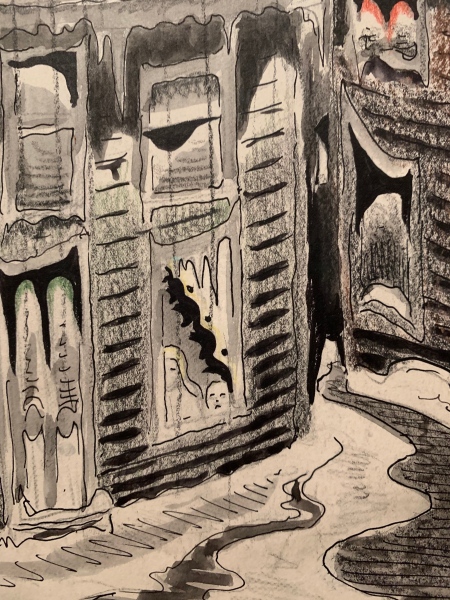 Charles Burchfield, The Sun through the Trees, 1917 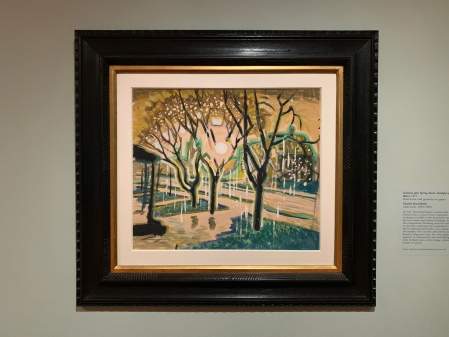 Charles Burchfield, journal entry (one of many on a digital kiosk)

Charles Burchfield, journal entry (one of many on a digital kiosk), detail

Comments Off on Charles Burchfield, Artist, Featured in Cleveland Exhibit |

The Outside Comes Inside, Cooper Hewitt’s Object of the Day, the Schmitz-Horning Company Catalogue.

Cooper Hewitt’s recent Object of the Day (December 17, 2017), The Outside Comes Inside, featured Schmitz-Horning Company’s San-Kro-Mura wall decoration catalogue from 1913-1914.

The Object of the Day webpage contains color images of selected catalogue pages and a brief audio recording about it and the company.

The wall decoration catalogue is available as part of an “adoption” program to gain funding to support the preservation of this book and others at the museum.

Cooper Hewitt, Smithsonian Design Museum currently has over 100 pieces in their collection from the Schmitz-Horning Company – the major collection was a gift from the Wallpaper Council, Inc. of New York, NY.

Schmitz-Horning was co-founded by Hugo M. Schmitz (my great-grandfather) and William Horning, artists and lithographers. It is believed the two became acquainted in the late 1800s in and around the Cleveland Art Club and artist’s community. Mr. Horning sold his interest in the company in 1920. Around 1926, Warren R. Schmitz (my grandfather), became vice president of the firm and assisted in company sales. In 1938 he became president of the company until it closed in 1960. 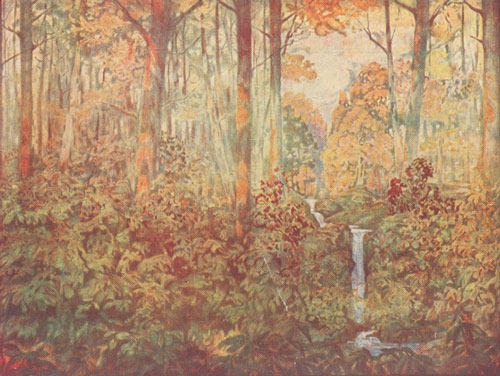 Comments Off on Cooper Hewitt’s Object of the Day, Schmitz-Horning Co. 1913-1914 Catalogue |

Sketching with other artists over the past year has been a worthwhile experience. I discovered Urban Sketchers Cleveland chapter on Facebook. After participating in the group’s monthly sketch outings at various locations, I learned about the Urban Sketchers international organization.

I’ve posted some recent sketches, and included information about the group below.

Urban Sketchers is a network of artists around the world who draw the cities where they live and travel to. Our mission is to “Show the World, One Drawing at a Time.” Visit our main blog at www.urbansketchers.org for more information.

Sketchers in the Cleveland area share their drawings at www.facebook.com/groups/urbansketcherscleveland and www.urbansketchers-cleveland.blogspot.com.

1. We draw on location, indoors or out, capturing what we see from direct observation.

2. Our drawings tell the story of our surroundings, the places we live and where we travel.

3. Our drawings are a record of time and place.

4. We are truthful to the scenes we witness.

5. We use any kind of media and cherish our individual styles.

6. We support each other and draw together.

8. We show the world, one drawing at a time.

NBC Nightly News with Lester Holt: This organization is turning drawing into a social pastime. Jan 20, 2018 – With more than 200 chapters worldwide, Urban Sketchers is helping people meet up and sketch together, taking what was once a solitary hobby and turning it into a social one. www.nbcnews.com/nightly-news/video/this-organization-is-turning-drawing-into-a-social-pastime-1141734979947 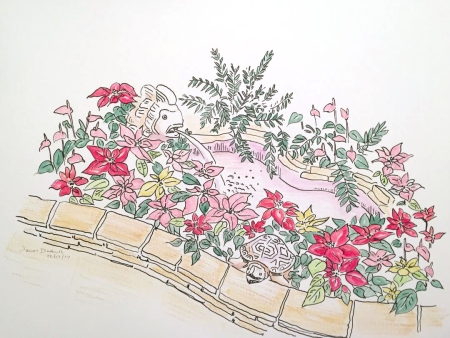 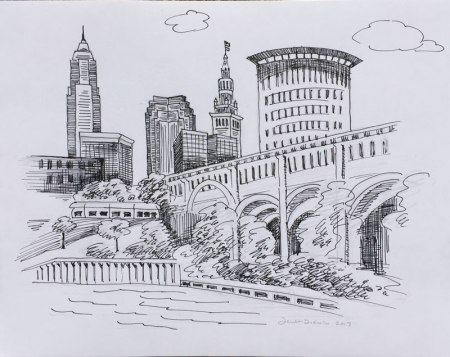 Comments Off on Urban Sketchers |

Loving Vincent is the first fully oil painted animated feature film, created on the life of Vincent van Gogh. The story takes place one year after his death, and the actual subjects of his paintings and landscapes are brought to life. We walk through time and space (as perhaps Vincent did) as if walking through his paintings, exploring the people in his life and the timeframe leading up to his death, recounted through black and white painted flashbacks.

The facts and controversy surrounding his death are presented to us, and are well-researched, referring to 300 actual historic letters. Over 100 artists contributed to the film, which is composed of 65,000 painted frames, and took six years to make. Ninety Four of Vincent’s paintings are recreated into the film, starting with a cast of actors that resemble subjects like Armand Roulin, Dr. Gachet, and Postman Roulin, Theo his brother, and even Vincent himself and filmed on video, then CGI techniques were applied and frames painted primarily by 80 selected oil painters. Decisions were made by varying palette color and frame dimensions in order to be both true to the paintings as much as possible but also make the movie scenes and characters logically work.

The film is brainchild of Dorota Kobiela, a painter herself, after her emotional response to reading his letters, and has received or been nominated for many awards.

Loving Vincent, Behind The Scenes. A presentation by Director/Producer Hugh Welchman
https://www.youtube.com/watch?v=eOtwJL4iV8s 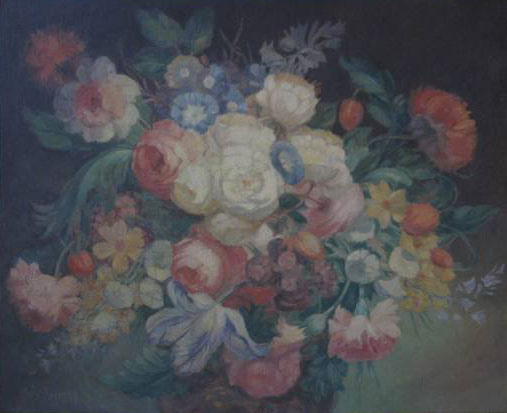 William Horning, was a partner of the Schmitz-Horning Company, a lithographic wall covering and mural manufacturing firm in Cleveland, Ohio founded around 1905.

His name appeared on a 1906 patent for a printed repeat pattern wall frieze (US 830931 A), along with that of Hugo Max Schmitz I (my great-grandfather), and Warren R. Cox (family friend and head salesman).

William (Bill) Horning was a Cleveland area artist and lithographer, in addition to Hugo.

He sold his interest in Schmitz-Horning around 1920, but continued to work in the printing industry in the Cleveland area.

He was referred to as a landscape, marine, and animal painter of Cleveland (Cuyahoga area), and exhibited with the Cleveland Art Club and the Water Color Society of Cleveland starting in 1894. He led and evening sketch class at the Cleveland Art Club in 1895. That is around the time that my great grandfather Hugo M. Schmitz, who moved to Cleveland from Wisconsin, attended the group. They may have met there before starting Schmitz-Horning Co. not long thereafter.

In 1930 he participated in an exhibition of water colors by members of the Cleveland Society of Artists, a group who held member exhibits semi-annually. Carl Broemel, who created art for many murals for Schmitz-Horning, also had paintings in the exhibit, and incidentally was hired by my grandparents to paint an oil portrait of my mother as a young girl.

Copyright article. All rights reserved. Not to be used without permission.

Comments Off on William Horning, Schmitz-Horning Co., Artist and Lithographer |

This October I took the Inktober pledge!

The Inktober Initiative was the idea of Jake Parker, established illustrator, to commit to ink drawing practice everyday for the month of October. Started in 2009, the event is practiced by artists around the world, and has official rules and daily idea prompt list to follow. Ink drawings are to be posted to social media on a regular basis using the this year’s hashtags, #inktober and #inktober2017.

I am posting my Inktober drawings to Twitter, Facebook, Instagram, and Google +. I enjoy being part of this creative endeavor and all 31 drawings will be posted here as the month progresses. This gives me the opportunity to practice sketching and drawing.

Bought some new art supplies to add to my art box for Inktober! #PerfectExcuse 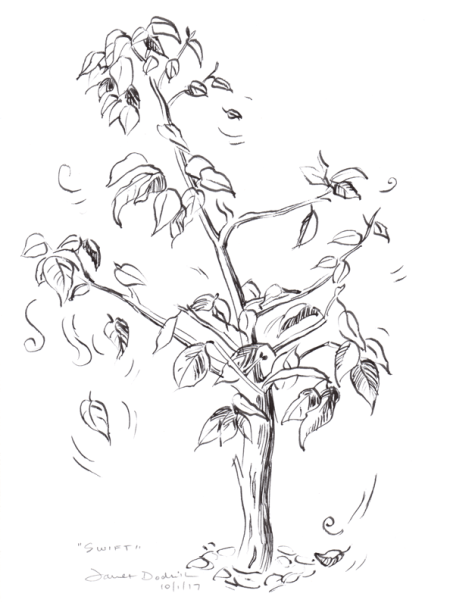 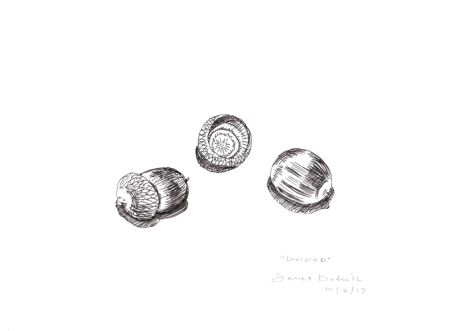 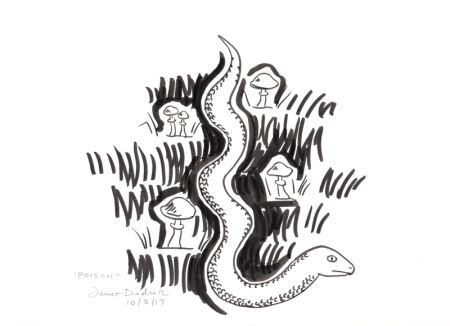 Update: below are some of my favorite ink sketches from Inktober. 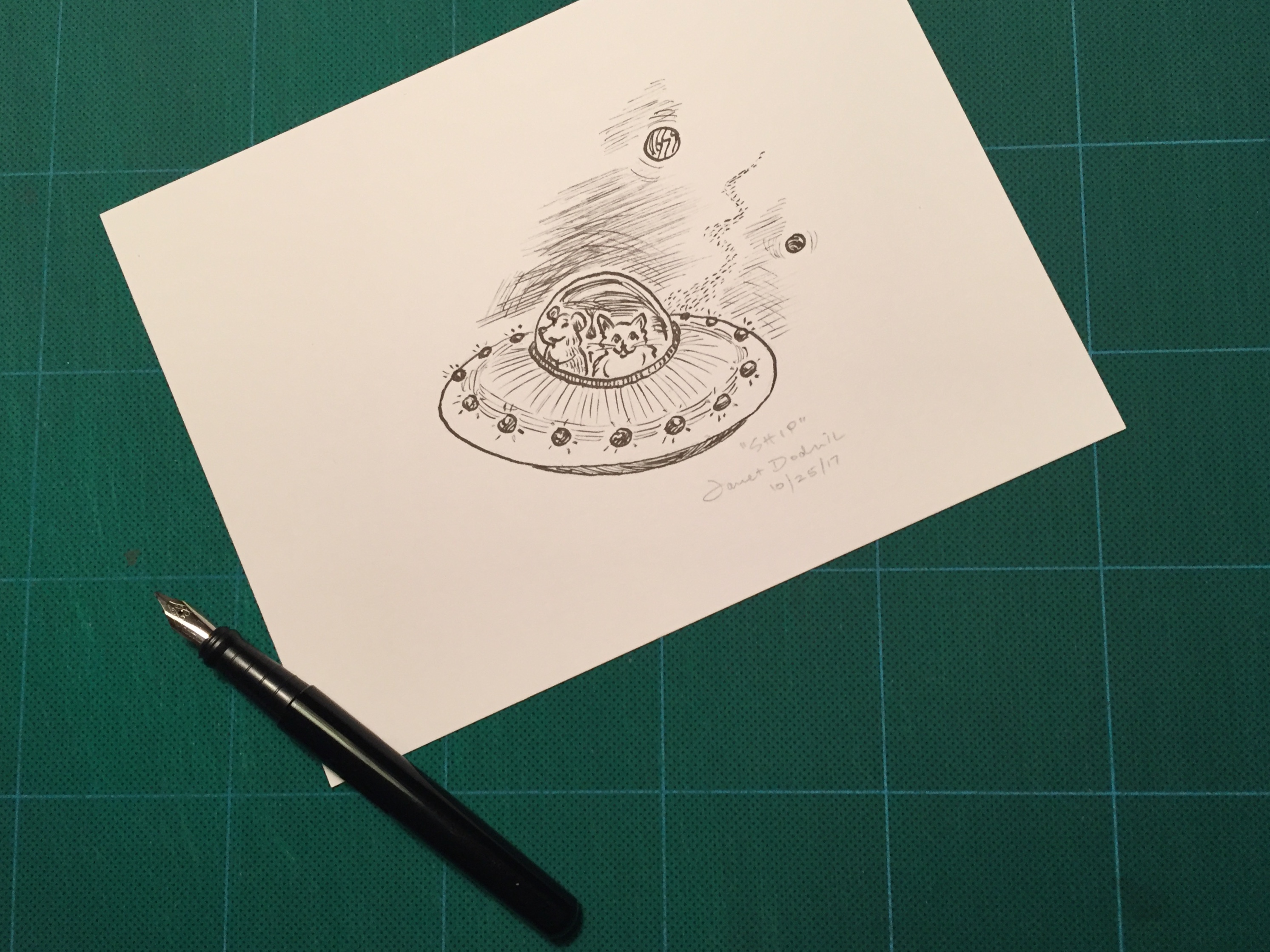 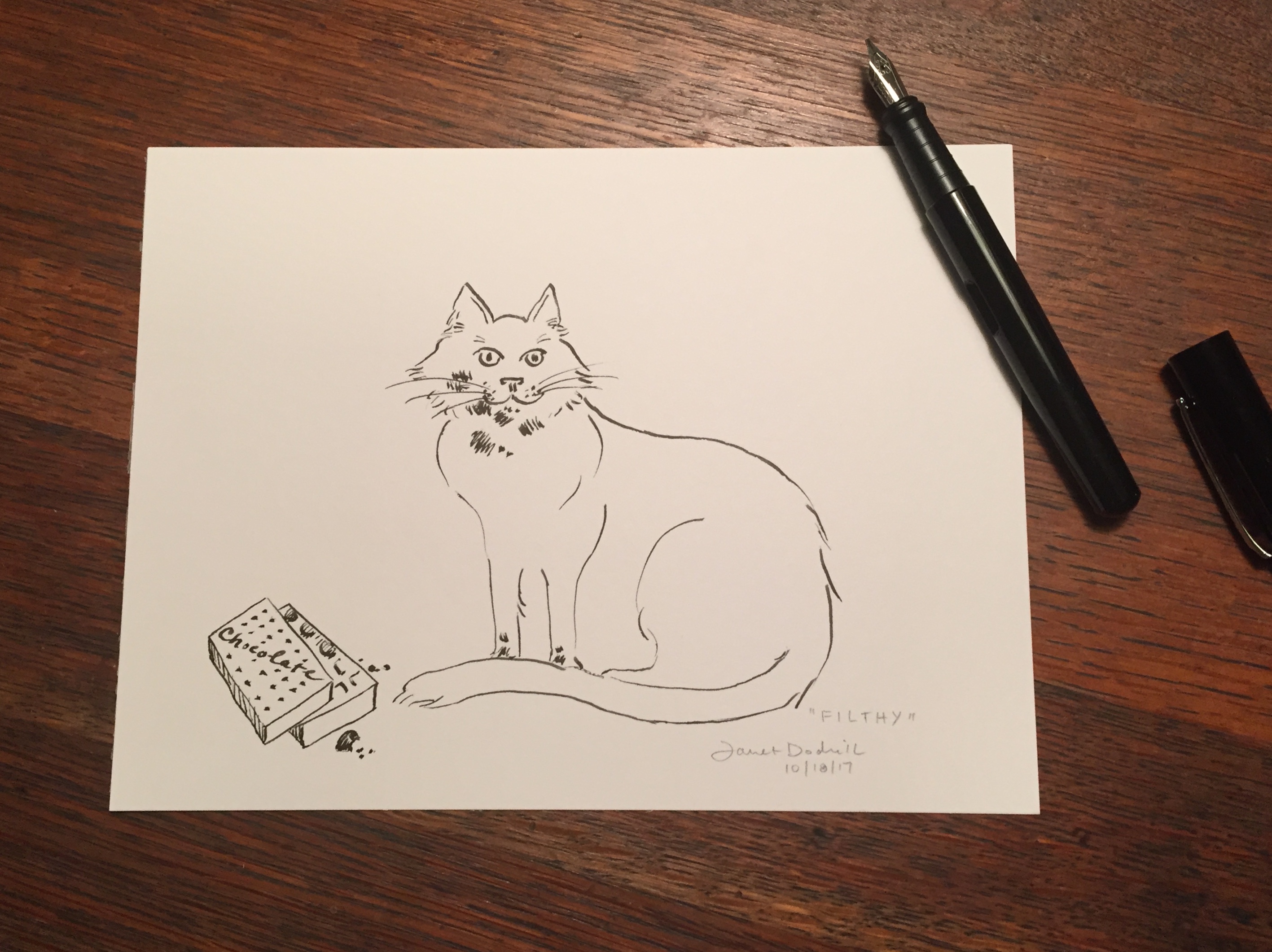 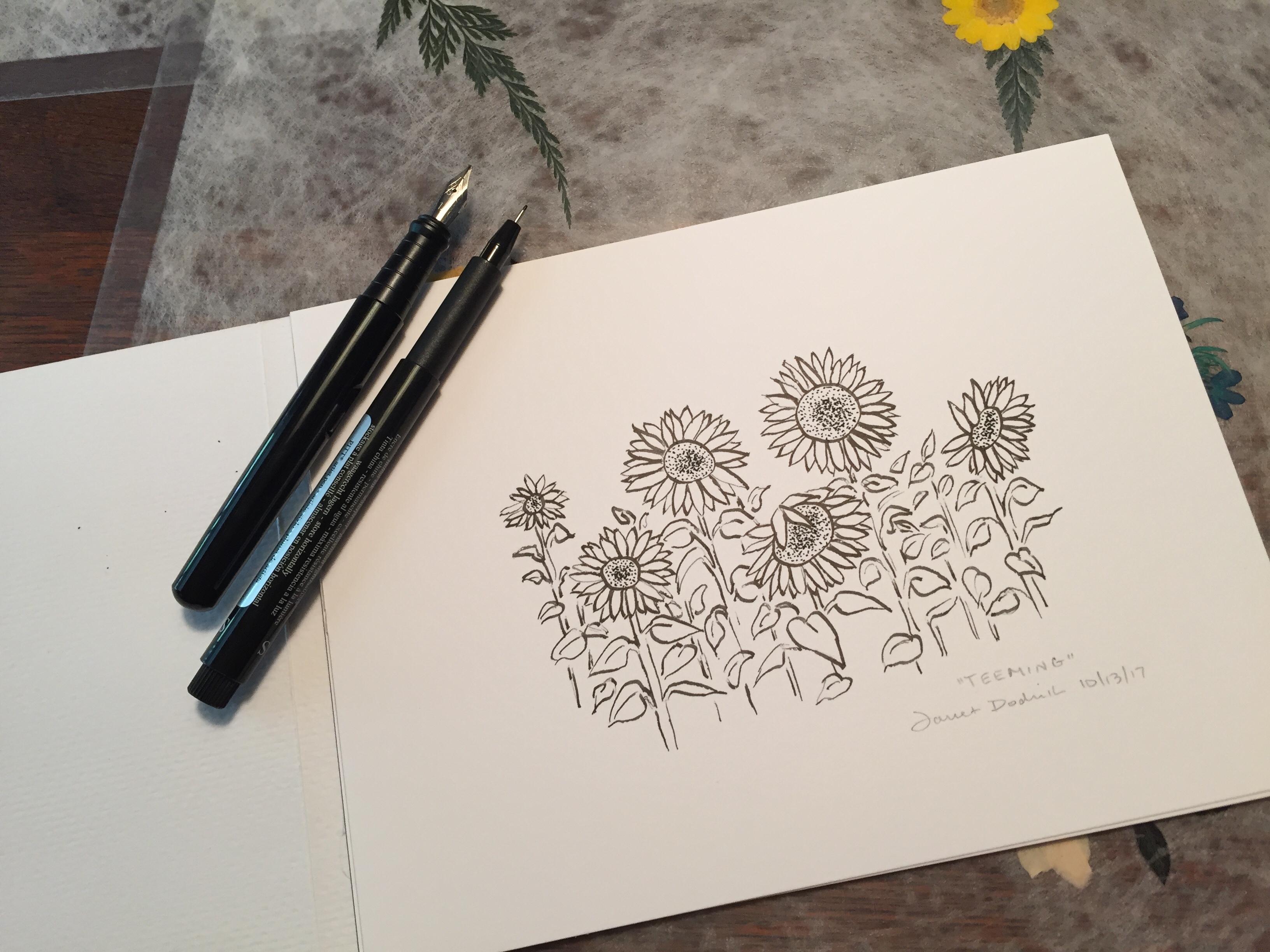 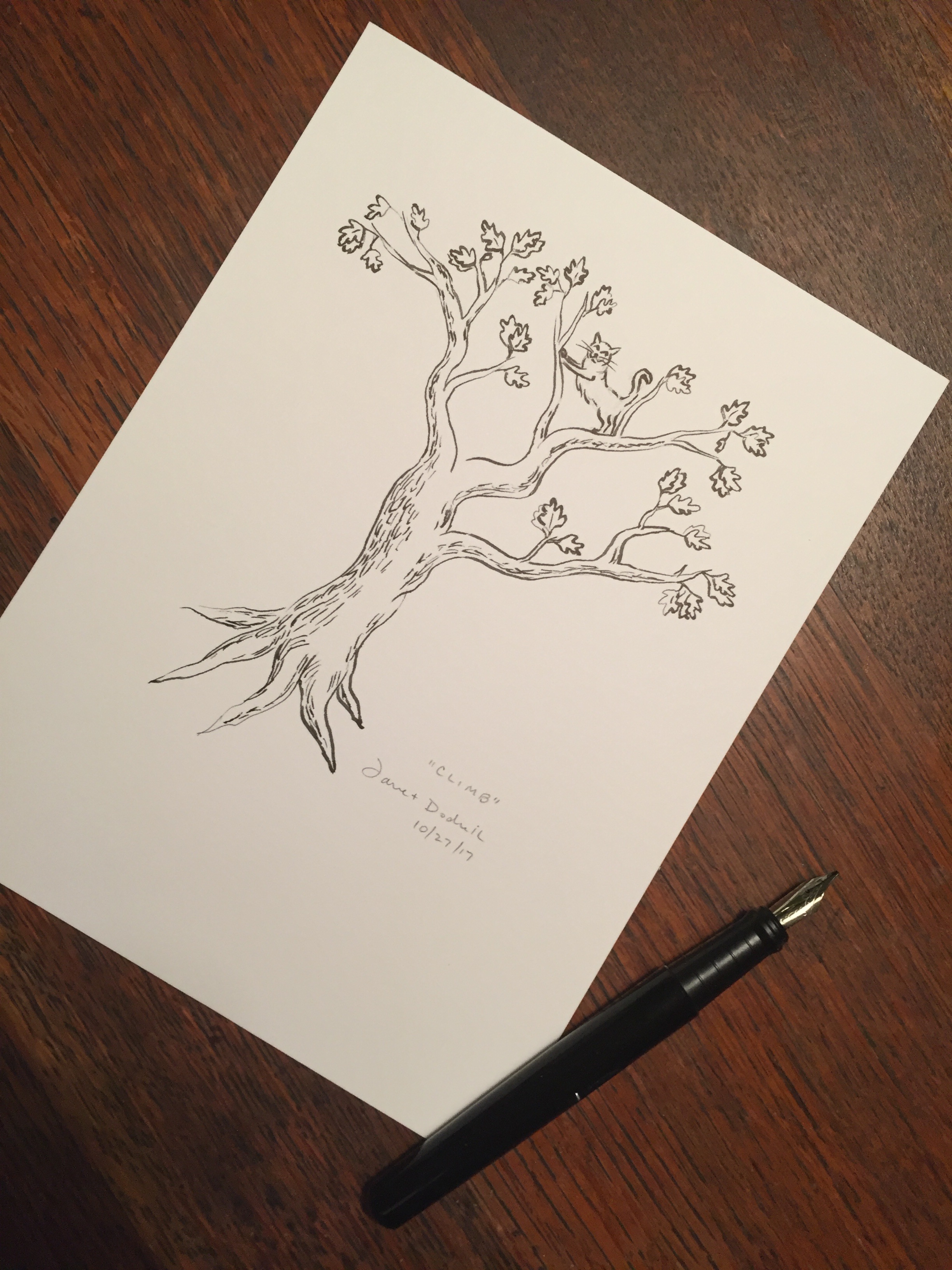 Comments Off on The Inktober Pledge |

In doing some research at Cleveland Public Library, I discovered The Plain Dealer newspapers on microfiche from around 1905. What astounded me was the beautiful pen and ink illustrations enhancing the publications. Here are a few snapshots from the archive. 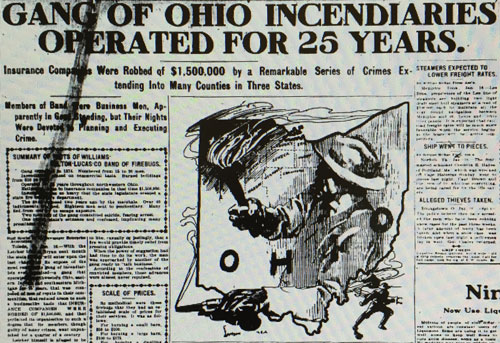 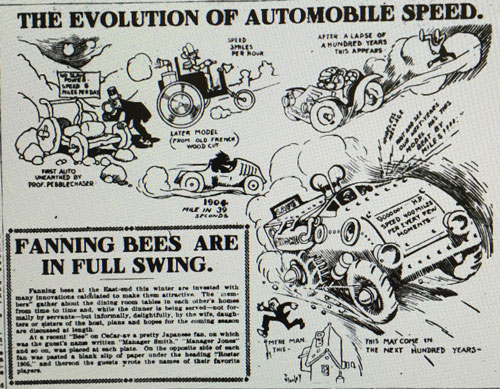 Comments Off on Skillful Illustrations in Historic Plain Dealer Newspapers |