In going through the family house a few years ago, I discovered catalogs and samples from my great-grandfather’s former Cleveland-based business, the Schmitz-Horning Company. Since then, I have been researching and learning about the company, and our family’s role in the company.

The Schmitz-Horning Company, which specialized in high quality washable color wallpaper, artistic murals and scenic panoramic wall coverings, was founded around 1905 by Hugo M. Schmitz I, an artist and my great-grandfather, and William (Bill) Horning, a lithographer. Mr. Horning left the partnership around 1920. My grandfather (Hugo’s son), Warren R. Schmitz, acted as vice president of the company starting in the late 1920s. After the tragic automobile-related death of Hugo Schmitz in 1938, Warren Schmitz served as president of the company.

Through Google, Cleveland’s newspaper The Plain Dealer archives through the Cuyahoga County Public Library’s website, and family materials, I have started my journey of piecing together a historical footprint of the company and some of the people that worked at the company. 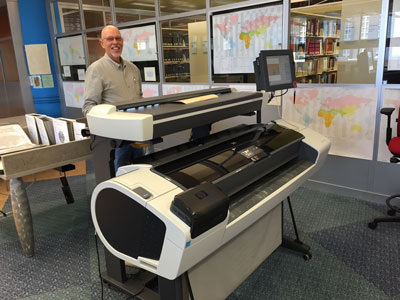 Recently, I discovered the public resources available at Cleveland Public Library in downtown Cleveland. Over several trips there, I visited the Cleveland Digital Public Library (CleDPL) (under the direction of Chatham Ewing, Digital Library Strategist), at 325 Superior Avenue, 3rd floor, the map department and the history department at 525 Superior Avenue, 6th floor, the business department on the 2nd floor, and the photograph collection on the 4th floor, and as a patron received assistance in researching and in documentation of our family’s materials.

Additionally, I was made aware of the Cleveland Public Library Digital Gallery, the library’s public online digital gallery.

A dedicated library staff assisted and enabled me to do extensive high resolution and large-scale scanning of our deteriorating Schmitz-Horning original wallpaper designs and mural lithographs, and multiple company catalogs, with an early one dating back to 1909, and most being the only known catalogs in existence. The Cleveland Digital Public Library, a new department since spring of this year, accommodated me for many hours spread over several weeks by assisting me with scans on an i2s SupraScan Quartz overhead scanner, synced to a pc, with size capabilities up to 33″ x 46″. They suggested methods regarding the preservation and storing of the materials. Other equipment available included an Epson Expression 10000 XL for photographs, and several book scanners, one high-speed ATIZ scanner, and one a versatile and user-friendly Knowledge Imaging Center (KIC) scanner. The map department had a large-scale feed-through type scanner (plus printer), a Hewlett Packer Designjet T1200 HD MFP, which scans up to 41″ wide by any length, which enabled me to scan one-of-a-kind lithographic wallpaper rolls, some over 100 inches long.

A selection of the materials scanned will be available on the Cleveland Public Library Digital Gallery, making documentation on this historic Cleveland business available to the public. Individuals researching companies in the wallpaper industry may also find it useful. 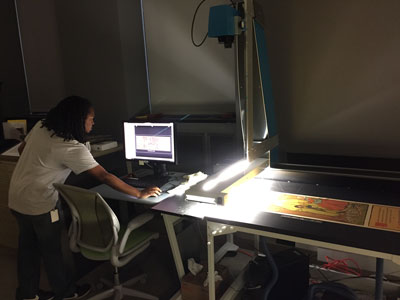 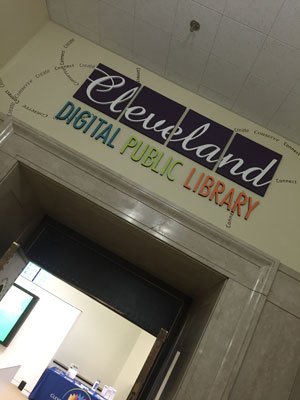 In the early 1900s there existed a Cleveland, Ohio wallpaper and mural art manufacturing company named Schmitz-Horning Company. Artist and printmaker Hugo Max Schmitz, co-founder, artist, and a second or third generation German immigrant, produced large scale decorative wall pieces known as “friezes”. These pictorial wall decorations were applied to the upper third of walls in high class home and hallways or public buildings (the lower area was typically covered in a solid wallpaper to serve as background for furniture). The company was innovative in its German imports of large scale plates for their color lithography and chromolithography printing, and the first to develop, though unpatented, a washable wallpaper printed in oil colors and cleanable with a damp cloth without injury to the paper.

Hugo wrote an article on ‘Wallpaper News’ for Arts & Decoration architecture magazine, October 1912 (pages 439-440) about this wall treatment and its application. According to the article, the wall decoration frieze was of a different concept than a typical wall border, which were to be used with wall-hangings. The designs were more independent in character, to take up not less than one quarter of the wall space (high room ceilings preferred), and its base should not be more than seven feet from the ground. The company also manufactured advertising posters.

Wife, Queen grew up in this E. Cleveland home on the north side of Euclid Avenue at Ivydale (across the street and down from the Rockefellers).

Mr. Schmitz knew many of the Cleveland School Artists, painted and sketched among them, and hired some of them to design wallpaper murals, including Henry Keller, and August Biehle. He also spoke of other local artists like Frank Wilcox and William Somer. He was close friends with Archibald Willard of Bedford, Ohio, who is known for his painting, The Spirit of ’76. Archibald Willard presented one of his landscape paintings to Hugo and his bride, Queen Reynolds for their wedding in 1902. Later he gave Hugo a table statue of the three soldiers depicted in his famous painting.

National Painters magazine, Volume 39. 1912 (pages 734-735) stated the company first appeared at the wall paper show in 1905 with their panoramic friezes. Early popular designs included the “Navajo”, the “Chase” and the “Cupids and Garlands”, and were considered dominant features with their bright colors and more importantly real works of art at a considerable low cost. Other newer named catalog items are named in the article with color variances including a ‘Wizard of Oz’ series, and subject matter including gardens and castles, foliage and tree tops, grasses, sunsets, tropics, brooks, fabric effects, sporting panels and fox hunters, poker games and horse drawn carriages, witches and caldrons, animal cut-outs for children, even story-telling “Pocahontas and Captain John Smith”, ranging in size from 10-41 inches, some in repeats, and some in continuous designs extending to 20 feet. Schmitz Horning had small scale illustrations made in actual colors for their catalogs.

In Building Age architecture magazine, 1919, (page 78) the catalogs are noted as of interest to the trade, and the friezes are described as affordable decorations which retained qualities of hand work or mural paintings, were sanitary (cleanable) and were said not to stain or fade.

Potter & Potter Auctions of Chicago has carried a number of Schmitz-Horning wall lithographs in their auctions.

The company was a member of The Wallpaper Council of New York, NY. After his tragic death by automobile accident in 1938, the business was run by Hugo’s son, Warren Reynolds Schmitz, until it closed sometime around 1960.

Hugo Max Schmitz was my great-grandfather, and though I never met him, I have admiration for him and share his passion for art and printmaking. His personal artwork included original portrait work in watercolor and oils.

Comments Off on Schmitz-Horning Company Created Wallpaper Murals and Art |