Working at Home? See MashableShop.com for this Month’s Freebies and Discounts to Online Courses, Apps and Subscriptions.

The Top 5 Books Every Entrepreneur Should Read, Free

Comments Off on Work at Home, Graphic Design Business Freebies and Discounts |

The National Gallery (@NationalGallery) tweeted on July 16, 2015 that now images can be downloaded from their collection for personal use! That got me interested in exploring their website www.nationalgallery.org.uk. Here are a few links to good resources, I discovered there, for the art enthusiast!

Explore the paintings:
Collection overview, 30 ‘must-see’ paintings, paintings room by room, a virtual tour of over 300 paintings, the picture of the month, the latest loans and acquisitions, and more.
www.nationalgallery.org.uk/view-the-collection

This month, the picture of the month is Peter Paul Rubens, A Roman Triumph, about 1630, with free downloadable wallpaper:
www.nationalgallery.org.uk/upload/img/wallpaper-rubens-a-roman-triumph-ng278.jpg

Caring for the paintings:
www.nationalgallery.org.uk/paintings/caring-for-the-paintings

Comments Off on The National Gallery Online Art Collection |

The Effects of Waterlogue

Have you heard of the iPhone and iPad app called Waterlogue? The app converts your photos into beautiful watercolor-like images. It is published by Tinrocket, LLC and was co-created by John Balestrieri (Tinrocket, LLC) and Robert Clair (Chromatic Bytes, LLC). Available on iTunes for $2.99, it has a 4+ customer rating.

It is one of my favorite art apps to use. I create custom note cards using images that I first shoot on the iPad and then run them through Waterlogue.

Below are a few images (before and after) I created using various filters in the app. 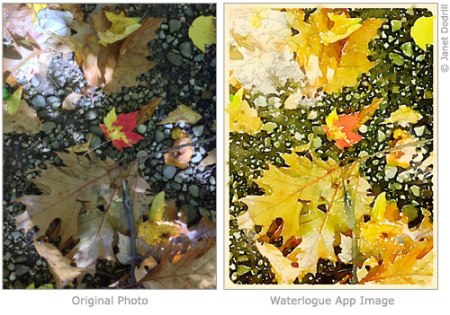 Comments Off on The Effects of Waterlogue |

Examples of what can be done in ArtStudio (videos) http://www.luckyclan.com/artstudio/?page=videos

ArtStudio How to get started digital painting on iPad, David Allen 6:59 (video) https://www.youtube.com/watch?v=uBfeKFYc5xU

Comments Off on Art Apps for iPad, ArtStudio and Inkpad |

Creating Art with an iPad

Drawing is something I have always loved, and trained for in fine arts school. Then came the computer and I learned the creative electronic tools to make a living as a graphic designer. Along came the iPad and I avoided it primarily because of the expense, saving for two years to afford one. After the purchase, again, I avoided it. In my mind it was not enough like the computer and required learning to use it. I didn’t really know what to do with it or what it could be used for. A year and a half later, I now pick it up regularly to reconnect with my love for drawing. After installing some art Apps, I began using them. I hope to keep practicing and improving my (digital) drawing skills. I know now that both drawing and working with the iPad do take practice! The key for me, like working towards anything worthwhile in life, is to keep practicing.

I will be briefly sharing some of my work and the tools used for it at an upcoming presentation later this month:

Comments Off on Creating Art with an iPad |

Nancy Dinger Aikins paints and draws with her finger…using an iPad! Her style is very unique and she is explorative in her approach to her art. Using principles in color theory, design, use of theme and pattern, she creates visually-appealing energetic compositions. She uses art Apps such as ArtRage, ArtStudio, Paper53, Repix, Percolator and DistressedFX to make her artistic art work. With confidence and integrity, she pushes and manipulates the tools and her images to extremes, in her personal journey which she shares with us in her work.

Nancy currently has some of her work on display in a group exhibit at Coffee Phix, 4441 Mayfield Road, South Euclid, Ohio 44121 through March 2014.

You can find Nancy’s iPad art on her web site, Doodling in the Dark, at www.nancy-aikins.squarespace.com and selected pieces for sale on her ETSY site, Every Crayon in the Box, at www.etsy.com/shop/everycrayoninthebox.

Have you experienced the panoramic photography option on iPhone 5’s using iOS6 (or iPhone 4S)? It can take up to a full 240-degree photo.

These are panoramic images I created recently using the iPhone 5:

Like art and technology? The recently opened Gallery One at Cleveland Museum of Art offers something for the whole family.

A room with a giant wall touch screen allows you to hand-pan through over 3,500

Gallery One’s Make a Face kiosk, matches art up to your facial expression.

images from the museum’s world-renowned permanent collection. The experience is enriching, and categories and themes of art are visually presented and refreshed often. I was informed by a tour guide that each touch tile cost $8,000 and it is the only one of its kind in the country. One of the tiles was pulled off the wall for us to see the light source and electronics behind it. We were ensured that the wall screen is wiped down twice daily for cleanliness!

Draw any shape in the Studio Play exploring room on a kiosk called ‘Line and Shape’, and it visually pairs-up and displays a museum object using that shape, whether it’s an edge of a ceramic vase, or a design in a tapestry.

‘Make a Face’ lets you make a face in front of a kiosk which is shot by a web cam, and

is matched to a face in the museum’s collection and displays them side by side. The same idea is used in making a body gesture by standing in front of the screen. A sculpture with a similar pose appears next to your image.

On the same kiosk, use the touch screen and take a slab of clay and roll it, cut it and create a vessel.

Bring your iPad or rent one there for $5 (the rentals use a great iPad case called GripCase, available at the museum gift shop or online), and run the ArtLens free app (iOS only). You can download it at the app store prior to your visit, and enjoy information and videos about the Gallery One collection even if off-site. Utilize it there and get assigned a special plastic disc with a micro-chip to pair your tablet up with the touch wall. Scroll through images with your hand on the wall and find your favorites. Press a heart shape under that image and it will save it to your iPad in a favorites list. Then your iPad allows you to share those images by email or social media, or create a custom tour which can be saved and viewed later, which includes detailed information about those particular works of art.

Travel around the room in the Gallery One exhibit (I was told photo-taking works on your iPad is allowed here), use ArtLens to let your device show you where you are in the exhibit using the ‘Near You Now’ feature. Hold up your tablet lens to a work of art, and your app will bring up a detailed description of that work of art which may include audio or video. Don’t want to use an iPad? There is a floor kiosk in each area of the Gallery One exhibit floor to allow you to call-up more information on the art you are standing near, or interact by taking polls. Works in this exhibit include works by Pablo Picasso, Auguste Rodin, Viktor Schreckengost, Giovanni Panini, and Chuck Close.

A Gallery One interactive kiosk.

See all this and even more attractions at this wonderful art and technology-based interactive gallery. Also on your trip there, enjoy the space in the new atrium, visit the restaurant, and explore the fabulous new museum store.

The Cleveland Museum of Art/ learn/in the galleries

Applause (video) ArtLens at the Cleveland Museum of Art

ArtLens app at the Cleveland Museum of Art is impressive, but it has a few glitches, The Plain Dealer

This will open up creative ways for Twitter users to tell a short story visually, in addition to the brief 140-character micro-logging allotment they currently have.

Currently only available for iPhone and iPod Touch, Vine (@vineapp) hopes to have an Android version, in addition to bug fixes and enhancements shortly. It is currently available free at the App Store.

The user-generated looping videos are anticipated to only improve in time, after the initial novelty has worn off and learning curve overcome.

Below are some recent articles and links of interest, which review the app and explain how to use it, with several showing examples of the videos created with Vine.

Twitter’s Vine App: How to Use It (PC Magazine)

Comments Off on Vine App, Brings 6-Second Video to Twitter |

Recently, by going through family photos, albums and scrapbooks, these three old Cleveland postcards of Euclid Avenue, University Circle and the Hollenden building, were discovered, passed down through our family. I love old Cleveland pictures, and it is even interesting seeing the written correspondence and stamps on some of them.

People crave nostalgia, and Clevelander’s enjoy anything Cleveland! Progress in civilization changes things so quickly, which we can mostly tell by looking back.

I’ve noticed, working in the graphics industry, that back in the day of keylines, typesetting,

hand-lettering and illustration (for me it was 1970s through early 1990s), we strived to achieve a polished high end look that was difficult to manufacture by hand. Then when the desktop publishing-capable computers were introduced it seemed to be the answer to our hopes. We could generate clean text and grab clip art graphics. However, by the late 1990s fonts were being created with a hand-written or grunge look. Stock illustration was less sleek and more stroked and textured. We sought a more natural look from our computer layouts, and for the visuals to appear to be more authentic.

I have found a similar comparison with the direction of cameras and photography. Over time we have made many improvements to cameras and photographic imagery. From tin to plates to film to now digital cameras with ever-increasing megapixels and other features. How ironic that we get software and app filters to give us an old sepia tone or vintage look.

The innovative Instagram, available first, offered a multiple digital image filter app that could be applied from a phone or tablet and posted on the world wide web for millions to see and took off in popularity. And there are many more other apps that now do the same thing, most recently Twitter and Flickr.

Seeing old postcards is still special. That is when the imagery was the best it could be. It brings us back to a time when we had other priorities. You can just tell by these postcards that the fancy architecture shown would have drawn visitors to Cleveland, and that people were out catching cable cars, operating their horse-drawn carriages while going downtown to shop or work at their businesses, and other things of the day. It starts-off our imaginations when we look at them. 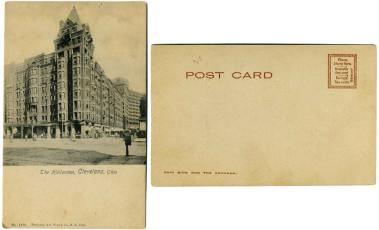 Comments Off on Old Cleveland Postcards |